The largest known dinosaur to have ever existed was the Argentinosaurus. It gets its name because it was discovered in Argentina. It lived 90 million years ago. It was 30 meters long and weighed as much as a dozen elephants.

The lifespan of dinosaurs varied by species. Some only lived for a few years, while others could live for up to 70+ years.

The first dinosaur bone was discovered in 1676 by Robert Plot, a museum curator. Although, at the time, he believed it belonged to a giant (human).

Dinosaurs were the largest animals that ever lived on land.

Dinosaur fossils have even been found in Antarctica.

The word “dinosaur” comes from the term “Dinosauria,” created by Richard Owen, a British scientist in 1841. The word means, “terrible lizard.”

Some dinosaurs, like the Parasaurolophus, had hollow crests on top of their heads that were connected to nasal passages. These could be used to make sounds to communicate to each other — for example, to call to a mate, or to signal that they were in danger.

Spiders and crocodiles have something in common. Both were alive during the age of dinosaurs, and both are still alive today.

Many dinosaur species were social animals. That means they would travel in herds and have families.

The first Tyrannosaurus Rex specimen was found in 1902, in Montana by Barnum Brown, an American paleontologist.

The Plateosaurus had claws on its fingers. The claws were probably used to rake up plants to eat, because it was an herbivore.

Triceratops and Tyrannosaurus rex did not live during the Jurassic Period. They actually appeared closer to the end of the Cretaceous Period.

Some dinosaurs, like the Maiasaura, were good parents. They would care for their eggs, nuture their babies, and teach them skills as they grew older.

Humans and dinosaurs did not live on the earth at the same time. Humans didn’t evolve until 65 million years after dinosaurs became extinct.

Paleontologists can determine how old a dinosaur was by counting rings on the inside of their bones, similar to a tree trunk.

While scientists don’t yet know for certain what color dinosaurs were, many paleontologists believe the different species had a very diverse range of colors, just like birds do.

The fastest known dinosaur was the Compsognathus. It is believed they could run at speeds up to 40 miles per hour (64 kilometers per hour). They were also one of the smallest — they were only as big as a modern day turkey.

Dinosaur fossils have been found all over the world because when dinosaurs first appeared on earth, there was only one giant continent in the whole world. It was called Pangea. Pangea had separated into most of the continents we know today by the beginning of the Cretaceous Period.

The T. rex (Tyrannosaurus rex) had teeth that were six inches long. They were as big and as sharp as steak knives.

Fossils of teeth of certain kinds of dinosaurs show that some were actually omnivores — meaning they had a diet of eating both plants and meat.

There are currently over 1,000 (one thousand) species of dinosaurs that have been discovered.

The very first dinosaur eggs were found in 1922 in the Gobi desert by the American explorer, Roy Chapman Andrews.

Although there has been historical debate about whether the Tyrannosaurus rex was a predator or scavenger (only eating the meat of animals already dead), the remains of other dinosaurs have been found with broken T. rex teeth and bite marks that have been healed over. This means that the dinosaur was still very much alive when it was chomped on by its predator, a T. rex. 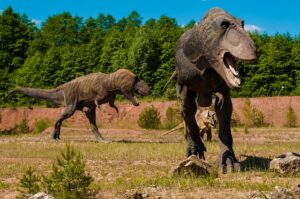 People during the age of ancient China would crush dinosaur fossils, attempting to make magic potions. They believed that the fossils were from dragons.

A Stegosaurus was a large dinosaur — it was 30 feet long. Its brain however, was smaller than a hot dog.

The giant swimming or flying reptiles of the Mesozoic era were not dinosaurs. The name “dinosaur” only refers to the giant reptiles that walked and lived on land.

Even though dinosaurs were reptiles, they were not cold-blooded. They were actually warm-blooded, which means their bodies were able to maintain a constant body temperature that didn’t depend on its surroundings.

Dinosaurs disappeared from the earth about 65 million years ago.

Paleontologists know that areas of sedimentary rock layers are a good place to look for dinosaur fossils. That’s because they can determine which areas are from 245 million to 65 million years ago, which is when dinosaurs lived.

Every creature that is considered to have been a dinosaur are vertebrates — meaning, they all had spines and backbones.

Dinosaurs became extinct because a giant asteroid from space crashed into the earth. It landed just on the edge of the Yucatan Peninsula, in the Gulf of Mexico. The majority of earth’s plant and animal life was killed, including the dinosaurs. Some of the life was destroyed immediately, from things such as earthquakes, fires, radiation and tsunamis. Others died from disruptions to the food chain in the time that followed, as sunlight couldn’t pass through the sooty atmosphere making photosynthesis nearly impossible.

How an asteroid ended the age of the dinosaurs. (n.d.). Natural History Museum. Retrieved March 16, 2021, from https://www.nhm.ac.uk/discover/how-an-asteroid-caused-extinction-of-dinosaurs.html

Charlesworth, L., & Sachatello-Sawyer, B. (1996). Dinosaurs: The Very Latest Information and Hands-On Acitivities from the Museum of the Rockies. Scholastic Teaching Resources.

Robertson, B. (2001). Fascinating Facts about the Earth, Space, Wild Animals, and People. Scholastic.