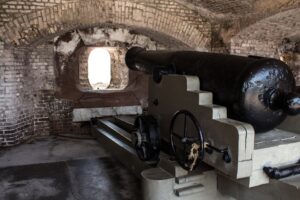 Have you ever heard the phrase, “hold the fort” and wonder where did the phrase come from?

The phrase “hold the fort” is an idiom (an expression that has more than one meaning).

Here is an example of how “hold the fort” is used:

“Our supervisor was going to be late, so he called me to ask me to hold the fort until he arrived.”

Here is what “hold the fort” is meant in this context:

to temporarily be responsible for something, such as watching over a place and taking care of any problems that may occur.

But where did this phrase come from?

The origin of this idiom comes from Civil War times, and/or the “wild west”. Soldiers would often have the responsibility of defending a fort. When attackers would come, the soldiers would often get the command to “hold the fort” — meaning that it was their duty to protect the fort and keep everything together until more help arrived.

Today, the phrase is used in a number of situations where someone is either left in charge of something or responsible for temporarily.

An example could include something like babysitting, where the babysitter is “holding the fort” until the parents return.

Or, an employee of a store “holding the fort” — which would mean he / she is in charge of the store until the owner / boss returns.