Let’s answer some questions like, “Why are they in my house? Do they really stink? Do they bite? How do I get rid of them? Is it just me, or does there seem to be a lot more of them lately?” 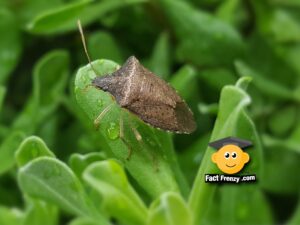 You might have wondered about these insects too. FactFrenzy.com presents these interesting stink bug facts to help answer the questions you may have had about stink bugs!

Stink bugs, or stinkbugs, are true bugs. That is, they belong to the order, Heteroptera. Although many insects and other crawling or flying creatures are commonly referred to as “bugs,” only those in the Heteroptera are scientifically “true bugs.”

Stink bugs are also sometimes referred to as “shield bugs,” however shield bugs are actually in the family Acanthosomatidae, and look very similar.

The appearances of stink bug species vary greatly, with colors ranging between brown, green, or metallic, with variances of  shapes such as oval, broad, and slightly convex. These appearances help to camouflage stink bugs in natural habitats, such as on trees, plants, or bushes.

In some species of stink bugs, females and males may have different colorations and forms. The scientific term for this is sexual dimorphism.

Stink bugs get their name because they can release a foul odor when they feel threatened, or when they meet their demise and get squashed.

People describe the smell of stink bugs very differently. Some people might say it’s an ammonia type of smell. Others might describe it as burnt tires, or even like cilantro. And yet, there are many people who cannot smell them at all. The experience seems to be quite different for most people.

Why are stink bugs in my house?

In the fall, stink bugs look for cozy places where they’re going to start hibernating for the winter.

Depending on how warm the environment is (such as inside your home), stink bugs may still move around sluggishly during hibernation.  They’re in low-activity mode because the food they eat is outside, and is scarce during frozen winter months.

The warmer the environment is, the more stink bugs may become active as the higher temperature can trick them into thinking it’s spring.

What do stink bugs eat?

Most stink bugs in the world are vegetarian and feed on plants, trees, fruits, vegetables, and legumes. These stink bugs can be pests for farmers and garden growers. However, some species of stink bugs, such as those native to the United States, are carnivores and eat other insects that damage crops. These specific kinds would be ideal for plant growers to have around.

Are stink bugs multiplying in my house?

No. The life cycle of stink bugs begins in the spring, when they lay their eggs. After they hatch, they’ll spend the summer months going through several nymph phases, molting and shedding their outgrown exoskeleton a few times. They’ve normally reached adulthood by fall.

The lifespan of each species of stink bugs vary, but on average, stink bugs can live in their adult stage for 6-8 months.

The adult stink bugs you see in your house in February are the same stink bugs that found a way into your home last fall as adults.

How did these stink bugs get inside my house?

Stink bugs find many ways to get inside. Sometimes they’ll just wander in an open door. They can also find a way in through cracks and openings around pipes, electrical outlets, under the fascia of roofs, or around windows.

How do I get stink bugs out of my house?

The best way is through prevention. Professional exterminators advise people to inspect their homes and seal any of the common openings they can use to get in, as mentioned above.

Some people also use natural repellants, which take advantage of certain scents that stink to a stink bug. Garlic, and a number of essential oils are known to be disliked by stink bugs.

There are also traps that can be made at home, which use a light to lure the stink bug into a funneled base. These can be easily made with an empty 2-liter plastic bottle, carefully cutting the top portion off and inverting it into the base, like a funnel. Then, with a battery powered small night light in the bottom of the base, tape the two parts of the plastic 2-liter bottle together with masking tape going up vertically on both pieces, just on the outside. This gives the stink bug traction to crawl up and inside the funnel and slide down the slippery plastic to the light, which they’re wanting to get to. The design of the trap is too complicated and slippery (inside) for the stink bugs to escape. Once captured, the stink bugs can then be released back into the wild.

Another way is to wait until spring when they’re officially out of hibernation. Stink bugs will want to leave on their own if they can find a way out. Springtime is when they lay their eggs, and they’d prefer to do it outdoors. Not to mention, they need to eat. Everything that a stink bug eats is found outside.

Wasps are a natural predator to stink bugs, but this fact only tends to be beneficial outdoors.

When infestations become overwhelming, hiring a professional exterminator may be needed.

Why am I seeing more stink bugs than ever before?

In 1996, an invasive species of stink bug from East Asia was introduced to North America. The Brown Marmorated Stink Bug (BMSB), Halyomorpha halys, made its way to other countries as well. This probably occurred by way of shipping crates, with hibernating stink bugs as stowaways in the cargo.

The brown marmorated stink bug thrives in warmer weather, and climate change has caused their numbers to fluctuate during certain years.

These stink bugs have proven to be devastating to crops, especially those that grow fruits and vegetables. They are larger and different than those indigenous to the United States that eat other pest insects that damage crops.

It is extremely rare for a stink bug to bite a human. They also don’t pose a threat to pets, or carry diseases. Some people may have allergies to the chemicals that are released by the glands of stink bugs that emit odor. Also, it’s possible for some people to experience minor skin irritation when coming into contact with this chemical.

Overall, the only threat stink bugs may pose to most humans is an annoyance, or the financial impact to farmers, by the species that are known to damage crops.